Hurricane is a protest song written by Bob Dylan about the wrongful imprisonment of Ruben “Hurricane” Carter for a murder he did not commit! 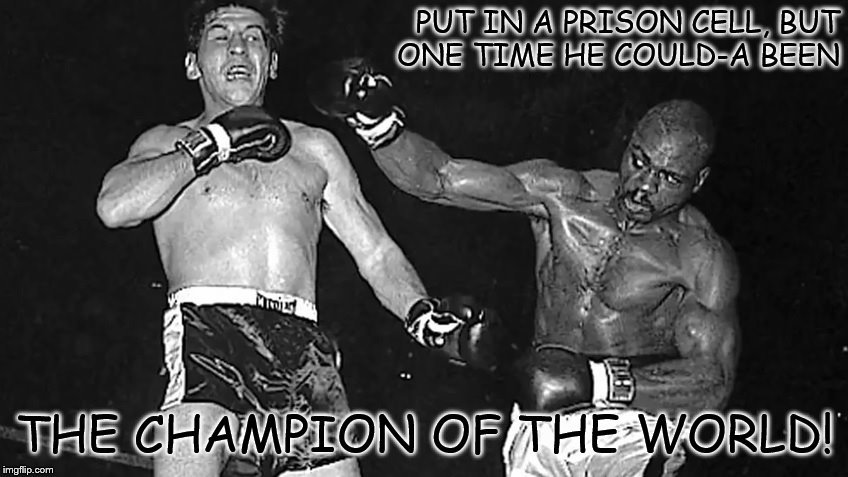 Pistol shots ring out in the barroom night
Enter Patty Valentine from the upper hall
She sees the bartender in a pool of blood
Cries out, “My God, they killed them all!”
Here comes the story of the Hurricane
The man the authorities came to blame
For somethin’ that he never done
Put in a prison cell, but one time he could-a been
The champion of the world
Three bodies lyin’ there does Patty see
And another man named Bello, movin’ around mysteriously
“I didn’t do it, ” he says, and he throws up his hands
“I was only robbin’ the register, I hope you understand
I saw them leavin’, ” he says, and he stops
“One of us had better call up the cops.”
And so Patty calls the cops
And they arrive on the scene with their red lights flashin’
In the hot New Jersey night
Meanwhile, far away in another part of town
Rubin Carter and a couple of friends are drivin’ around
Number one contender for the middleweight crown
Had no idea what kinda shit was about to go down
When a cop pulled him over to the side of the road
Just like the time before and the time before that
In Paterson that’s just the way things go
If you’re black you might as well not show up on the street
‘Less you want to draw the heat
Alfred Bello had a partner and he had a rap for the cops
Him and Arthur Dexter Bradley were just out prowlin’ around
He said, “I saw two men runnin’ out, they looked like middleweights
They jumped into a white car with out-of-state plates.”
And Miss Patty Valentine just nodded her head
Cop said, “Wait a minute, boys, this one’s not dead”
So they took him to the infirmary
And though this man could hardly see
They told him that he could identify the guilty men
Four in the mornin’ and they haul Rubin in
Take him to the hospital and they bring him upstairs
The wounded man looks up through his one dyin’ eye
Says, “Wha’d you bring him in here for? He ain’t the guy!”
Yes, here’s the story of the Hurricane
The man the authorities came to blame
For somethin’ that he never done
Put in a prison cell, but one time he could-a been
The champion of the world
Four months later, the ghettos are in flame
Rubin’s in South America, fightin’ for his name
While Arthur Dexter Bradley’s still in the robbery game
And the cops are puttin’ the screws to him, lookin’ for somebody to blame
“Remember that murder that happened in a bar?”
“Remember you said you saw the getaway car?”
“You think you’d like to play ball with the law?”
“Think it might-a been that fighter that you saw runnin’ that night?”
“Don’t forget that you are white.”
Arthur Dexter Bradley said, “I’m really not sure.”
Cops said, “A poor boy like you could use a break
We got you for the motel job and we’re talkin’ to your friend Bello
Now you don’t wanta have to go back to jail, be a nice fellow
You’ll be doin’ society a favor
That sonofabitch is brave and gettin’ braver
We want to put his ass in stir
We want to pin this triple murder on him
He ain’t no Gentleman Jim.”
Rubin could take a man out with just one punch
But he never did like to talk about it all that much
It’s my work, he’d say, and I do it for pay
And when it’s over I’d just as soon go on my way
Up to some paradise
Where the trout streams flow and the air is nice
And ride a horse along a trail
But then they took him to the jailhouse
Where they try to turn a man into a mouse
All of Rubin’s cards were marked in advance
The trial was a pig-circus, he never had a chance
The judge made Rubin’s witnesses drunkards from the slums
To the white folks who watched he was a revolutionary bum
And to the black folks he was just a crazy nigger
No one doubted that he pulled the trigger
And though they could not produce the gun
The D.A. said he was the one who did the deed
And the all-white jury agreed
Rubin Carter was falsely tried
The crime was murder “one, ” guess who testified?
Bello and Bradley and they both baldly lied
And the newspapers, they all went along for the ride
How can the life of such a man
Be in the palm of some fool’s hand?
To see him obviously framed
Couldn’t help but make me feel ashamed to live in a land
Where justice is a game
Now all the criminals in their coats and their ties
Are free to drink martinis and watch the sun rise
While Rubin sits like Buddha in a ten-foot cell
An innocent man in a living hell
That’s the story of the Hurricane
But it won’t be over till they clear his name
And give him back the time he’s done
Put in a prison cell, but one time he could-a been
The champion of the world
Songwriters: Jacques Levy / Bob Dylan