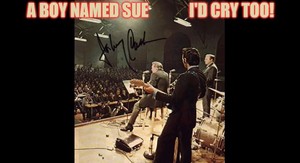 A boy named Sue!? I’d cry too! This is Johnny Cash’s cover of A Boy Named Sue originally written by Shel Silverstein, recorded live February 24, 1969 at San Quentin Prison. The music in this song is as good as any of his songs but the story told in this one is classic, funny and very entertaining! I could listen to this song on repeat for hours!

Johnny Cash was well known for doing cover songs throughout his career. What was amazing, he would cover songs completely out of his standard genre and do them his way!